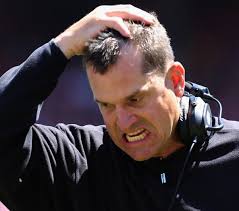 — ChabDog tries to give Frank a Rosie outlook for the day with some New Jersey rock from The Boss;
— Put in Matt I Want Less Moore;
— Harbaugh’s still harboring resentment for L’il brutha’s latest home invasion at the Big House;
— MD’s application for the Misfit Conference has just been given special attention by the admissions committee;
— Forget Tornado Alley… Norman’s located smack dab in the middle of Cyclone County;
— Don Criqui gets so excited during his broadcast of Notre Dame’s slamming of the lamb-like Rams that his girdle came undone;
— Trojans pounded the Beavers;
— Bulldogs promise to drink up at the World’s Largest Outdoor Cocktail Party… and it won’t matter;
— Hear why Bryce got a call from the Secret Service about some broken windows at the White House;
— Girardi’s days may be numbered like those of Frankie Pantangeli .. “Michael Corleone says hello”;
— One of the world’s great unsolved mysteries… why does Chris Sale run out of gas each August?
— “Live from the Dolong Bridge, it’s the ChabDog Sports Network”;
— Deano reminds us “You’re not drunk if you can lay on the floor without holding”;
— Eric negotiates syndication rights, live on the air, for “Let me be Frank”;
— Caruso confirms that the Red Sox will clench their fists and prevail in Game 3 over the Astros and their magical midget;
— Much discussion about steroid use and things breaking off, both on the field and in the bathroom of the Bada Bing;
— Jay Cutler as a color commentator? We wouldn’t put him in a telephone booth…
— and more